Two golf courses to be phased out by 2024

The Government has announced the fate of golf clubs here, after days of speculation over which of the golf courses with leases expiring within the next 10 years will have to make way for redevelopment.

The remaining four will have their leases extended with no change. Of the four, however, Orchid Country Club’s lease will not be further renewed after 2030.

Singapore has 14 private golf courses and three public golf courses, taking up 1,500ha of land, or about 2 per cent of the Republic’s total land area. Last February, the Government had said that some of these golf courses will have to be phased out and the land be put to other uses.

Keppel Club, which has origins dating back to 1904, will not have its lease extended after it expires on Dec 31, 2021, as the land is needed for housing development. The club, which occupies some 44ha of land, will be offered an alternative site to operate as a social club if it is keen, the Ministry of Law (Minlaw) and the Singapore Land Authority (SLA) said today (Feb 16).

TMCC and NSRCC will have their leases extended, but will give up some of their land for Changi Airport’s expansion plans. The Government will acquire about 10ha of land from TMCC — comprising six holes from TMCC’s Garden golf course, three of its tennis courts and two of its storage sheds — to make way for new taxiways to be built at Changi Airport. The SLA will gazette the land affected by the acquisition tomorrow (Feb 17).

The SICC’s courses at its Island location will have its lease extended, but one of its two Bukit location courses will be run as a public course by the labour movement when its lease expires in 2021. This is to ensure public access to golfing facilities when the Marina Bay Golf Course — a 68-ha public course — is phased out for redevelopment.

The lease for the SICC’s other Bukit course will only be extended if it can work out with the labour movement how to reconfigure its courses and possibly share its facilities by February next year. The authorities also suggested that the labour movement discuss the possibility of offering some arrangement to Keppel Club members at the public course. “This depends, of course, on all the parties being able to agree on terms,” they said.

The changes affected about 200ha of land in all. “Golfing is an activity that is enjoyed by many Singaporeans, with many of them owning or aspiring to own memberships in golf clubs,” the authorities said. “However, golfing and golf clubs are land intensive and there is a need to balance the competing demands for land.” 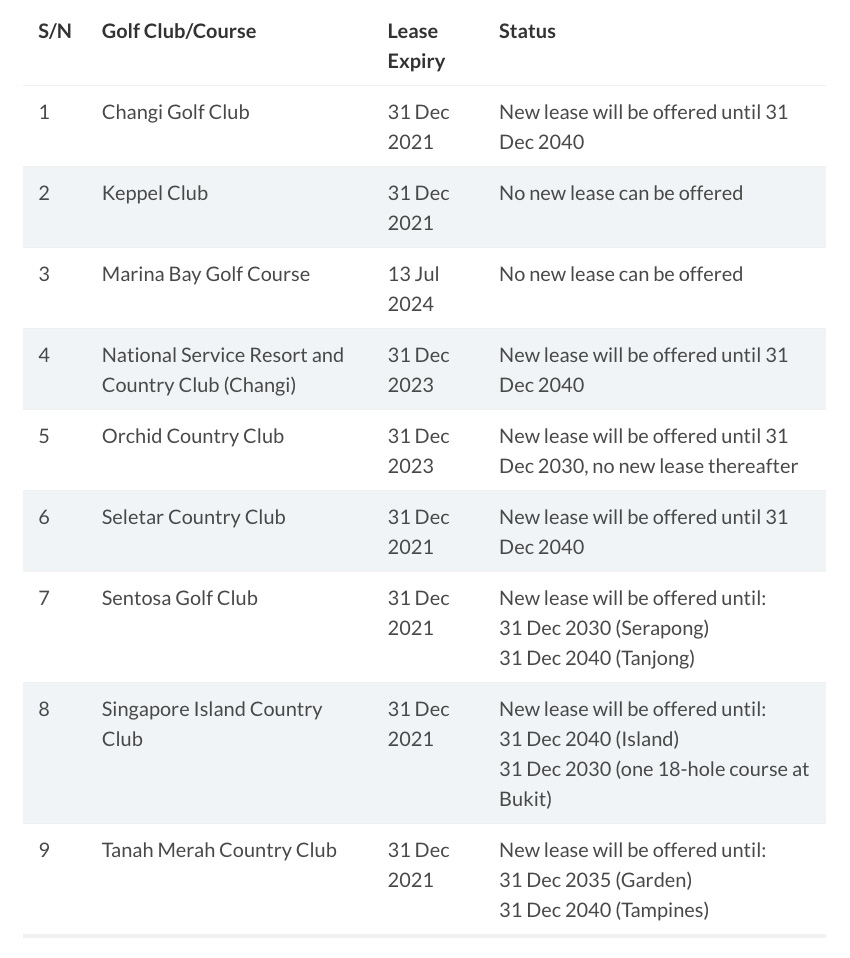